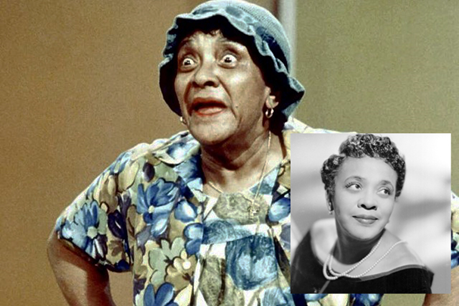 Loretta Aiken took her stage name, Jackie Mabley, from an early boyfriend, commenting to Ebony in a 1970s interview that he had taken so much from her, it was the least she could do to take his name.  Later she became known as “Moms” because she was indeed a “Mom” to many other comedians on the circuit in the 1950s and 1960s.  She came out as a lesbian at the age of twenty-seven, becoming one of the first openly gay comedians. During the 1920s and 1930s she appeared in androgynous clothing (as she did in the film version of The Emperor Jones with Paul Robeson) and recorded several of her early “lesbian stand-up” routines.  Mabley was one of the most successful entertainers of the Chitlin’ Circuit, another name for T.O.B.A., or Theater Owners Booking Association. T.O.B.A., sometimes called the “Tough On Black Asses Circuit”, was the segregated organization for which Mabley performed until the organization dissolved during the Great Depression. Despite Mabley’s popularity, wages for black women in show business were meager. Nonetheless, she persisted for more than sixty years. At the height of her career, she was earning US$10,000 a week at Harlem’s Apollo Theater. She made her New York City debut at Connie’s Inn in Harlem.  In the 1960s, she became known to a wider white audience, playing Carnegie Hall in 1962, and making a number of mainstream TV appearances, particularly her multiple appearances on The Smothers Brothers Comedy Hour when that CBS show was number one on television in the late 1960s, which introduced her to a whole new Boomer audience.  Mabley was billed as “The Funniest Woman in the World”. She tackled topics too edgy for most mainstream comics of the time, including racism. One of her regular themes was a romantic interest in handsome young men rather than old “washed-up geezers”, and she got away with it courtesy of her stage persona, where she appeared as a toothless, bedraggled woman in a house dress and floppy hat.  She also added the occasional satirical song to her jokes, and her (completely serious and melancholy) cover version of “Abraham, Martin and John” hit #35 on the Billboard Hot 100 on July 19, 1969. At 75 years old, Mabley became the oldest living person ever to have a US Top 40 hit (Louis Armstrong, who would have been 86 when “What a Wonderful World” became a hit in 1988, is the oldest overall, although Armstrong was younger than Mabley when the record was made)

Loretta Mary Aiken (March 19, 1894 – May 23, 1975), known by her stage name Jackie “Moms” Mabley, was an American standup comedian. A veteran of the Chitlin’ Circuit of African-American vaudeville, she later appeared on the Ed Sullivan Show and The Smothers Brothers Comedy Hour