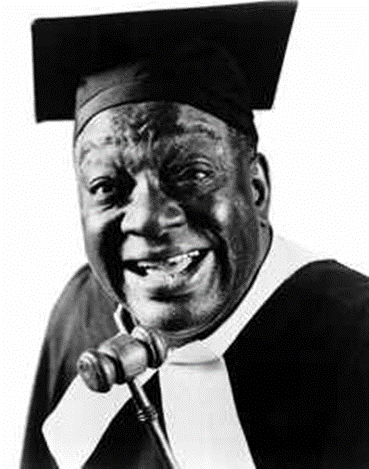 He was born in the community of Hayti, Durham, North Carolina.  His family was the most prominent on their street, which came to be called (and later officially named) Markham Street in the Hayti District. Markham began his career in traveling music and burlesque shows. For a time he was a member of Bessie Smith’s Traveling Revue in the 1920s.  Later, he claimed he originated the Truckin’ dance which became nationally popular at the start of the 1930s. In the 1940s he started making film appearances.

In 1964 he recorded “Open the Door, Richard”.  Markham was a familiar act at New York’s famed Apollo Theater where he wore blackface makeup and huge painted white lips, despite complaints the vaudeville tradition was degrading. He probably played at the Apollo more frequently than any other performer. Starting in the 1950s Pigmeat Markham began appearing on television, making multiple appearances on The Ed Sullivan Show. His boisterous, indecorous “heyeah (here) come da judge” schtick, which made a mockery of formal courtroom etiquette, became his signature routine. Markham would sit at an elevated judge’s bench (often in a black graduation cap-and-gown, to look more impressive), and deal with a series of comic miscreants. He would often deliver his “judgments”, as well as express frustration with the accused, by leaning over the bench and smacking the accused with an inflated bladder-balloon. He had hit comedy recordings in the 1960s on Chess Records, and saw his routine’s entry line become a catchphrase on the Rowan & Martin’s Laugh-In NBC television show, as did his phrase “Look that up in your Funk and Wagnalls.” Markham’s most famous routine was “discovered” by the general public only after Sammy Davis, Jr. had performed it as a guest on the March 25, 1968 episode of Laugh-In. Due to the years of racial segregation in the entertainment world, he was not widely known by white audiences, and had almost exclusively performed on the “Chitlin’ Circuit” of vaudeville, theatres, and night clubs[1] and appeared in several race films, including William D. Alexander’s 1949 revue film Burlesque in Harlem, which documented the Chitlin’ Circuit. The phenomenal ripple effect of Davis’s version of “the judge” led to Markham’s opportunity to perform his signature Judge character himself as a Laugh-In regular during the 1968–69 television season.[8] Archie Campbell later adapted Markham’s routine, performing as “Justus O’Peace,” on the country version of Laugh-In, Hee Haw, which borrowed heavily from the minstrel show tradition. Thanks to his Heyeah come da judge routine, which originally was accompanied by music with a funky beat, Pigmeat Markham is regarded as a forerunner of rap.[9] His song “Here Comes the Judge” peaked at number 19 on the Billboard[10] and other charts in 1968. He published an autobiography, Here Come the Judge!, in the wake of his Laugh-In success.